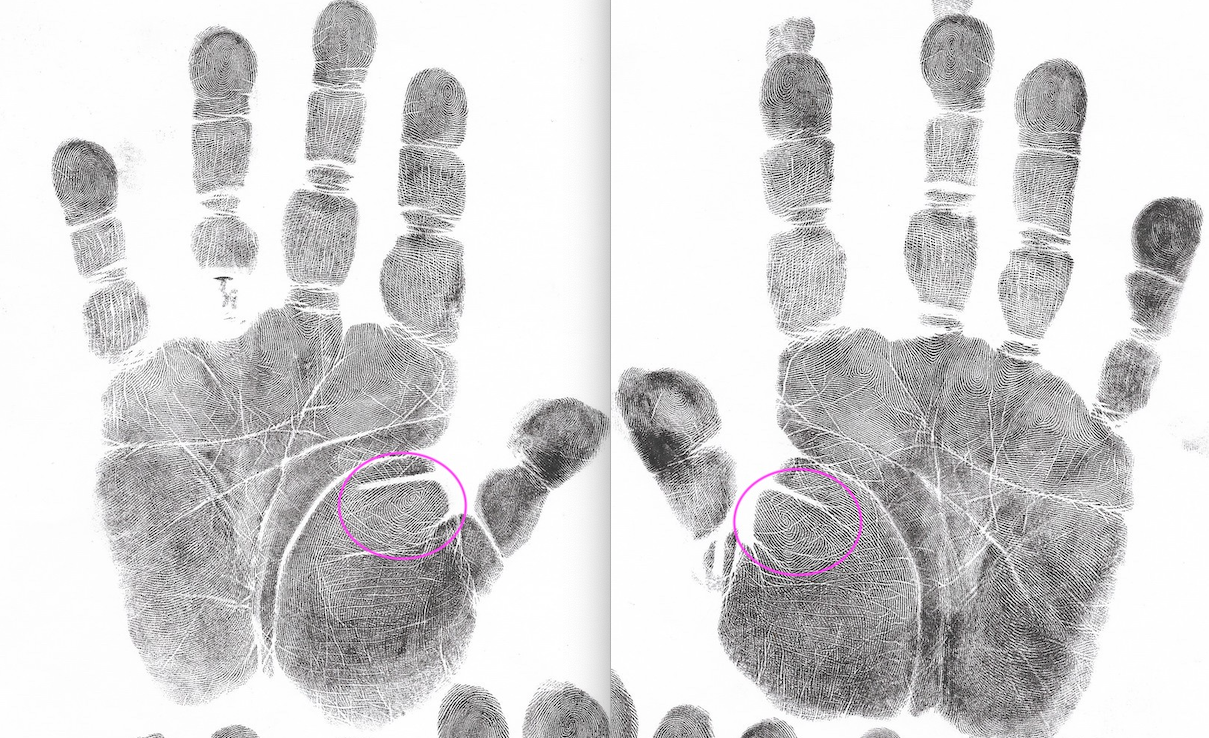 Whorl Pattern in the Palm – Mars

It’s quite exciting for a hand reader to find a Whorl pattern in the palm of the hand. To find a Whorl in both palms of a person’s hands is doubly sensational. In nature, the Whorl (above) is not ordinarily found. Although you’ve probably seen them on the digits (fingers and thumbs) of the hand. The concentric circles, creating the whorl symbol, can also be found on the surface of a tree trunk after it’s been cut down.

Finding a Whorl in the Mars Mount of the hand is a big deal and must be elevated to great importance in the reading. Advanced Martian living becomes the life purpose, where the owner will feel most fulfilled and satisfied in his or her life.

These two hands (above) came across my desk this week and both, belonging to the same owner, have Whorls on the Mount of Mars (inside pink colored circles). Some professional readers may call these glyphs Peacocks and I wouldn’t argue. Either way, the implication needs to be elevated to Life Purpose position.

Mars (Roman)/Ares (Greek) is known as the God of War.

Ares as the embodiment of aggression, has been one of the strongest forces working through human history. He is Olympos’ “Action Man,” the god of war and strife, the restless and turbulent lover, thriving on conflict and rejoicing in the delight of battle. In Ares we see our own aggression raw and bloody, before civilization tempered or repressed it. – Arianna Stassinopoulos, The Gods of Greece

“Of the twelve Olympians, The Greeks places Ares in the least respected position because of his irrationality and battle frenzy. He represented the uncontrollable lust for battle and bloodshed. In contrast, as Mars, the Romans held him in high regard, second only to Jupiter (Roman)/Zeus (Greek) in importance.” – Jean Shinoda Bolan, Gods in Every Man

The story and imagery portrayed in mythology is fascinating. The archetypal associations in our lives is quite relevant when more deeply investigating and understanding our motivations, values and preferences.

When describing what the Whorl in the Mars zone of the hand means to the owner, the hand reader will be spot on when dialoging about the Mars/Ares archetypal patterns of engagement.

When discussing a strong Mars Mount, Star or Whorl in this area I refer to Diana/Wonder Woman with women, Clark Kent/Superman to men and the Incredible Hulk to children and teens. Each represent Hero’s and Protectors. Brutus (as in Popeye), as Brawler, is an alternative side of Mars that will most likely be part of the owners learning journey at some point or another.

Ares and Aphrodite, Goddess of Love, were notable lovers. Both love and war come together in this union. Great passion is portrayed in love and war so unleashed passion is not surprising for the Action Wo/Man. Having an appropriate outlet for this eminent level of vitality is important for the health and well-being of this archetype.

Standing up for the underdog brings fulfillment to the owner with a well-marked Mars zone, which includes a Whorl here. The Warrior needs a cause, something to stand for, to protect. The Whorl indicates a life purpose where his or her exceptional courage and bravery must be exercised.

Martians do best when using their fierce nature, defending those who are unable to stand up for themselves – such as mistreated animals, foster children, veterans or battered women – to name a few. However, if this hero-type doesn’t have an appropriate cause for all this energy, he or she just may end up feeling weak and cowardly, or the opposite – impulsively violent.

Just like the Lion in “Wizard of Oz,” owners of a Mars Whorl must have a bold and fearless course of action to devote their enthusiasm toward. The aim is to evolve from Ares into Mars, the battle-lusting Greek God of War into the protector of the community, successfully navigating conflict as the Roman Mars.

Click here to learn more about becoming professionally trained in the art and science of non-predictive hand analysis.

Below are conversations had on Facebook about the above article after being posted:

Jennifer Hirsch such a precious find, magnificent! I wonder about the contradiction of the less assertive traits shown in the short low set water finger of the left hand…. fascinating!

American Academy of Hand Analysis Good eye Jennifer. With the low set and short Jupiter, he might go either way – less assertive and lacking confidence and/or pushy, getting angry when feeling disrespected.

Jennifer Hirsch ja! I get that 🙂 the obnoxious Napoleon thing.

Brent Bruning “The Greeks places Ares in the least respected position because of his irrationality and battle frenzy. He represented the uncontrollable lust for battle and bloodshed. In contrast, as Mars, the Romans held him in high regard, second only to Jupiter (Roman)/Zeus (Greek) in importance” — brilliant, love it. And they are overwhelmingly attracted to being the hero for underdogs no question. I found this in the horror film director Michael Steiner who wrote the film Grounding in defense of the people who lost their job, as well as a great horror film Sennentuschi. My brother has one as well – who built an international company rescuing reclaimed tai-furniture (wagon wheels) and making it as furniture. Mars has a conflict side for sure and all of them are attracted to hot irons. But they also have a playful side, the need for liberation and exalt and defend the childlike freedom and kids’s rights to explore boundaries and go through initiations. Great article. My brother below. No conflict there hahaha.

Brent Bruning He has been a lifelong case study. Fought in high school, had the Mustang car at 14, very popular with girls and guys looked up to him, worked his way through college, fought during his graduation, left the corporation after 2 years to travel the world, surf, bartend and live in a shipping container on a beach in hawaii, start his own company, tear it all down, craft furniture, work with kids at camp, work with kids at university… everything mars.