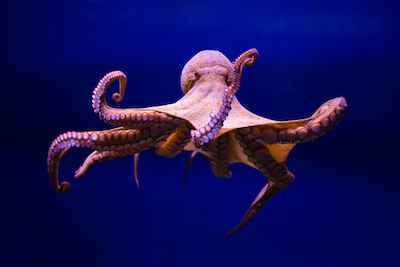 By Kay PackardAugust 2, 2017No Comments

When the Head Line is clear, extends with consistent thickness straight across the hand, as if it were drawn in with a pen, and terminates about one-quarter to one-half inch before the edge of the palm, you’ll find a Super Synthesizer. This person won’t feel fulfilled unless she has an avenue in which to use her multifaceted system of comprehension and analysis. The quote by Greek philosopher Epicurus applies here, “The greater the difficulty, the more glory in surmounting it.”

Think of this very long Head Line acting like an eight-armed octopus that must be in full synthesis mode in order to feel a deep sense of satisfaction. Each of the eight arms is equipped with numerous sense-gathering suction cups, too. Richard Unger calls such a long, clear Head Line HAL 9000, after the supercomputer in the science fiction story 2001: A Space Odyssey. I relay Unger’s description to my clients and watch their eyes open wide. In unison their body language matches their voice, saying, “Oh yes, that’s me.”

The following is the description I give to my long Head Lined clients and students. In 2001: A Space Odyssey, HAL is the central processing unit that controls everything on an entire Pan Am spaceship on a secret mission from Earth to Jupiter. HAL was the brain and nervous system of the ship and reported all problems to mission control.

HAL was constantly occupied, and said, ”I find things difficult to put out of my mind.” This is the gift and the curse of the octopus brain. On a good day, he put things together in an orderly fashion. On a bad day, he gets into a tangle.

In the end, having a bad day, HAL went haywire. He no longer had big enough problems to solve, so he over-analyzed little problems. The same can be said for someone with a HAL 9000 Head Line when not engaged in big challenging problems—the more complicated, the better. Assembling scraps of fabric for an elaborate quilt or reorganizing an entire corporation may suit Mr. or Ms. HAL, depending on other features in the hands. The Super Synthesizer Head Line has definite mental requirements—large, important projects with massive amounts of data.

Children with long Head Lines need enough intellectual challenge from school and home projects to keep them busy, otherwise they may very well create problems with siblings, friends, or schoolmates.

Once a father brought his eight-year-old daughter to me for a reading. She had a very long and clear Head Line. After I described her talent as a “super-duper computer,” she told me that she was very good at math and loved it. Unfortunately, she was teased by some of her classmates for having an advanced aptitude in mathematics. I encouraged her to maintain true friendships with those who would value her mental gifts.

If you are the owner of a Super Synthesizing Head Line, a sure sign that you’re not using your full potential is relationship problems. By initiating problems in relationships with others, you give yourself juicy problems to wrestle with. This makes HAL very happy, in a computer kind of way.

Super Synthesizer Positive: I use my exceptional mental aptitude to fully engage in colossal complexity, synthesizing large amounts of information.

Mantra: I exercise my ability to engage in the complex synthesis of thoughts without creating tangled webs within my closest relationships.